Here are our top 10 two player board games for kids. While these are generally aimed at children, adults will get plenty of enjoyment out of them as well!

Mr Cosmo has approved this list of games, and because he is 10 in dog years, he feels well qualified to pass judgement on games for young hoomans.

There are also some games under the Date Night category that are great for kids, so after you have finished on this page check them out here! 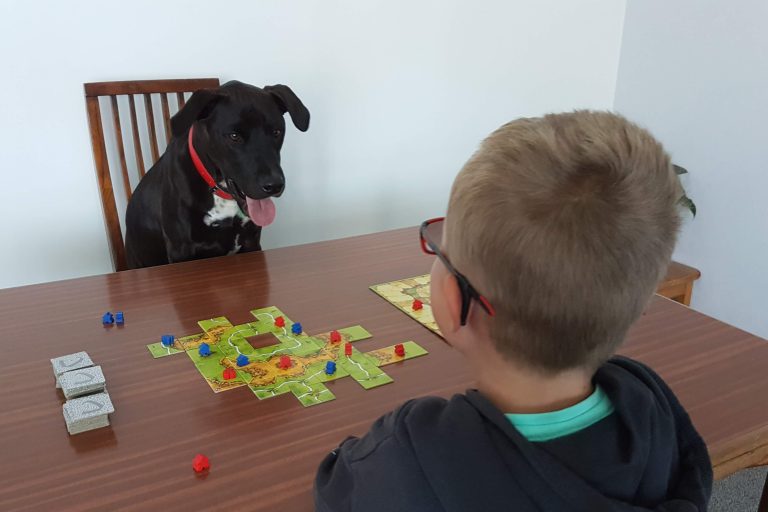 Rhino Hero (also known as Super Rhino) is a card stacking/dexterity game. ‘Super Rhino” is a (rather heavy) super hero who is impatient to scale the outside of your building – so he starts climbing while you are still in the process of building it…

The wall cards fold in half, and you take turns adding walls as specified on the flooring cards to make a tall card “building”. Certain cards bring additional challenges, including moving Super Rhino to a higher level in the tower. The aim is to use all of your flooring cards before your opponent, while being careful not to knock down the building.

This game is affordable, easy to understand, fun to play, and enjoyable for adults as well. Plus you are allowed to fold cards in half which kids will probably enjoy!

Note: Rhino Hero – Super Battle is a fun relative of this game with a wider tower base, monkeys hanging off the building, and more! But that game is more expensive and not quite as good for two players.

This game could make the list based on the name alone, however this is a fantastic game in its own right. In Ghost Fightin’ Treasure Hunters, players work together to fight ghosts and collect treasure from a haunted house before it becomes overrun with the spirits of the dead.

This game can bring out the best in your kids, especially siblings that don’t necessarily get on well together, as the game requires cooperation and some forethought into the tactics of how to beat the game.

Coconuts is a fun dexterity game, where your monkey launches coconuts towards a group of cups. Landing coconuts in cups helps you to start building a pyramid of cups, and the first player to complete a pyramid of six cups wins. The Monkey King Magic cards allow you to hinder your opponent in their efforts, by making them close their eyes, shoot from further away, etc. Even though players are launching small plastic coconuts around, the game is not very messy because the monkey catapult doesn’t let you throw the coconuts too far away.

Monkeys flinging coconuts around, need we say more?! Your kids will love it, and we bet you wouldn’t mind having a go on the monkey either (especially after a drink or two).

In Outfoxed! players work together to figure out who stole Mrs. Plumpert’s prized pot pie. Players move around the board looking for clues and use the nifty evidence scanner to rule out suspects. Players must find the identity of the guilty fox before the fox escapes out the exit.

Like Ghost Fightin’ Treasure Hunters, Outfoxed! is a great game for kids because the cooperative nature of the game promotes teamwork. It is a fun game, but also teaches kids many valuable skills, including probability estimation, deductive reasoning, attention to detail, and problem solving.

The Magic Labyrinth is a game where players move their pawns through a board with invisible walls to collect magical pieces. The illusion of invisible walls is created by wooden wall pieces that are placed below the board surface. A magnetic ball clings to the bottom of the pawn underneath the board. On your turn you attempt to move your pawn through the maze, but if your pawn tries to pass through an “invisible wall” the ball will fall off and your turn is over. You start back at the beginning of the maze on your next turn. The maze can be rearranged each time you play.

This is a very fun, but challenging memory game for both kids and adults. A great one for an adult to play with a child – if the child is too young to remember the maze, they can draw a map as they go which gives them an advantage against the adult.

Animal Upon Animal is a dexterity game that is well suited to kids but is also popular with adults (especially after a wee tipple). Players stack various wooden animals on top of the crocodile ‘tower base’, while trying not to knock over the animal tower. On your turn, you roll a die, and this will tell you how many animal pieces are to be placed on the tower, whether you or your opponent chooses which piece you will place, and whether the piece goes on top of the tower or at the base to make the tower wider. Sometimes you even get to make your opponent place the piece for you. If any pieces fall off while you are placing your pieces on the tower, you keep two of them and the rest go back in the box. The first player to use all of their animal wins.

This game is great to develop hand-eye coordination and fine motor skills, and challenging even for adults. When playing with two players you can use twice as many animal pieces per player to make bigger towers. There is also a travel size version that is cheaper and more portable, but the pieces are smaller so it is best for older kids and adults with well developed fine motor skills.

Ticket to Ride: First Journey (U.S.) is a simplified, kids version of the popular Ticket To Ride series of board games. This particular version of the game uses a map of America, although there is a European version available for kids too. Throughout the game you collect train cards, and then play train cards to claim routes on the map which allows you to place your trains on the map. You need to try to connect the cities shown on your tickets to complete each ticket. The first player to complete six tickets wins.

This is great to allow the whole family to play Ticket To Ride when your kids are still too young to be able to play the more complicated original version independently. There is still enough strategy involved to make it interesting, but a lot of it is down to luck which gives kids a good chance when playing against their parents.

This game has a very simple concept so is good for young kids, and offers something a bit different to other games.

Loony Quest has the same basic gameplay as Doodle Quest, however Loony Quest is inspired by video games so you play through levels of different worlds and defeat a boss at the end of each world. There are also different aspects included such as bombs that you have to avoid.

Loony Quest is more interesting and complex than Doodle Quest and as such is better for slightly older kids, and more fun for adults.

My First Carcassonne is a kids version of the very popular game Carcassonne. Players take turns drawing and placing a landscape tile. The tiles match in every direction unlike the adult version of Carcassonne. Some of the tiles show children on the road in the various player colours. Whenever a road is closed off, you can place your meeples on the appropriate pictures. The first player to place all of their meeples on the board wins.

This game is good for young kids (around 4-6 years old is ideal) after which they may become ready to ‘graduate’ to the adult version of Carcassonne. 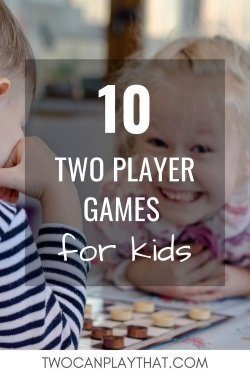 Let us know what you think of our list in the comments below. Are there any other great two player kids games that you would add to this list?